Shipping calculated at checkout.
"It’s a warm night in Roanoke, Virginia, and a man wearing a ghillie suit is shuffling down the street. His pants, taped around his legs, are bulging and leaking with water, while the trash bag hat he’s wearing is newly inflated with air from the gas station down the street. Suddenly, a police car’s light illuminates him, as well as the small crowd gathered around him. The cop is confused (as likely you are, too), “Don’t worry,” the man tells him. “It’s an art thing.”

This is the mad, loveable genius of Crank Sturgeon.

The piscine-themed noise/performance/visual artist that calls himself Crank Sturgeon (Crank, for short) first started operating sometime around 1992. As the man himself puts it in his painstakingly kept, 20,000 word-long autobiography on his website, the genesis of this alter-ego “was something of a crazy little breech-birth, an odd fingerling formed and seduced out of its primordial goo.” It was the combination of the idea of a never-stopping, always-cranking coffee with the, well, oddness, of a sturgeon. From that point on, he’s been traveling the world, rubbing bespoke contact mics over every surface he can for audiences both large and small.

As for his musical style, it varies wildly. On many tracks, his sound samples are harsh and metallic. On others, vocal tracks are layered over and over, while still others involve string instrumentation. Because he’s been active for so long, his discography is huge, with more than 250 titles listed on his website, and that doesn’t even include his online releases, or physical releases that have escaped him. When it comes to Crank’s process, painstaking curation is the rule, rather than the exception.

“The one thing that’s ingrained into our heads in art school is document, document, document,” Crank said of his extensive record-keeping, “I have notebooks filled with tons of sketches, and recordings that nobody gets to hear because much of it’s terrible. Filing cabinets full of cassette recordings, DAT tapes and CDs. It’s vital, like this is your friggin’ history!”

The latest of this long history is Marsh Annoys, which released on label Love Earth Music in May 2018. The album’s sound, to quote Crank, is “brutal,” partially in respect to +DOG+, the label’s premiere noise act and the personal project of its owner, Steve Davis.

The fact that you can buy this record (physical only) online makes it one of the more easily accessible items of his discography. Most of the titles on his page are—outside of the perennially mixed bag that is the Discogs marketplace—unavailable to anyone who becomes newly interested. Much of the rest is either not online and unlisted, or scattered about on various labels’ streaming sites, all of which are very much worth a listen. While many noise musicians have a relatively high output (see Merzbow’s more than 400 albums), one of the most impressive things is the sheer amount of work he puts into not only his music, but his visual art, too.

It isn’t just his goofy, fish-head-like hat he wears to shows. Many of Crank’s performances either start with some performance art component, or take place in and around his already constructed installations. For some, he even takes some time off between/during tours to set up more permanent pieces. One of my personal favorites that can be found online is his “Hoboplane,” a giant, swinging airplane made out of hobo signs. A photo of the occasion depicts him adjusting in-flight goggles and smiling wildly, and on another, the front panel of his would-be flying machine urges audience members to throw pocket change at him. 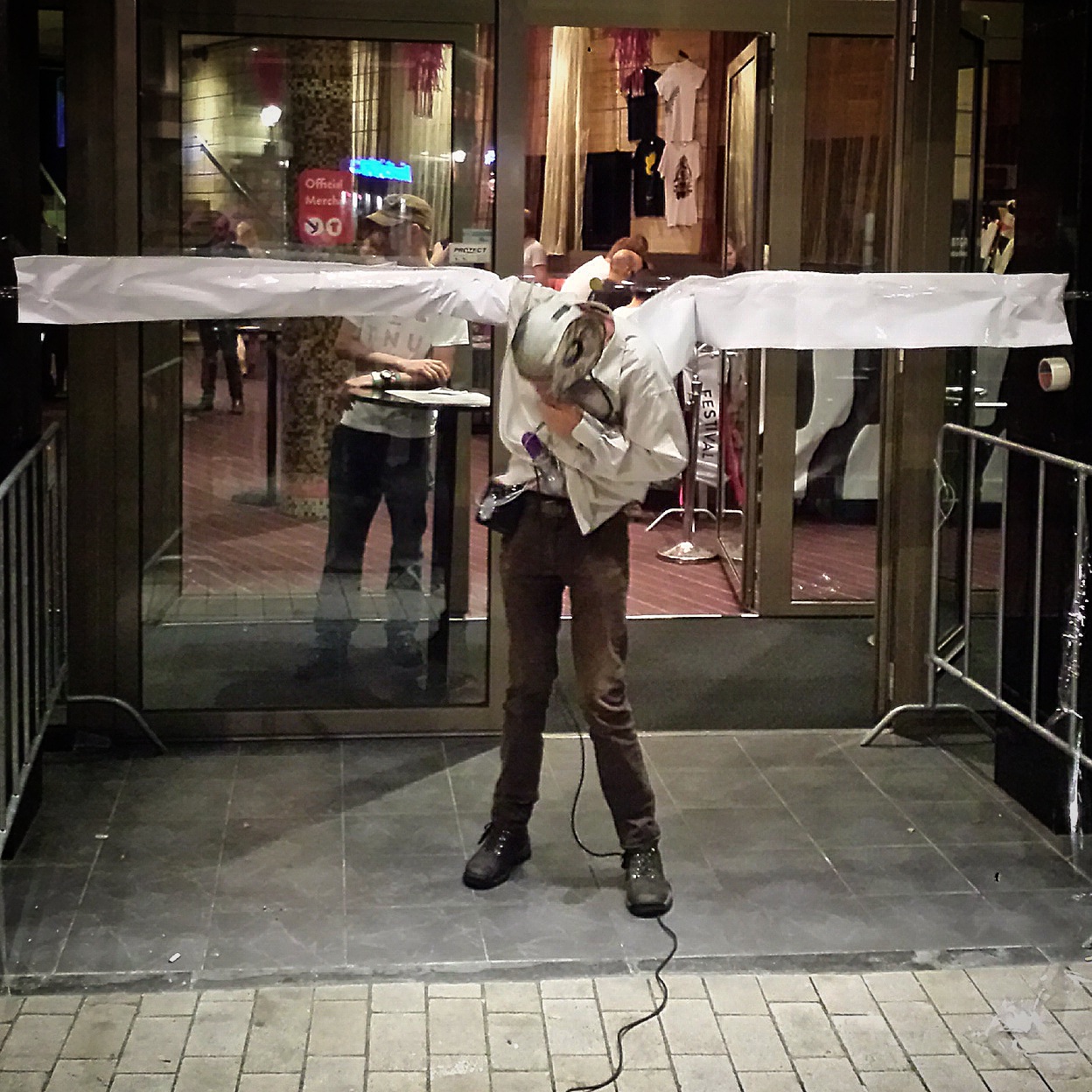 “A lot of my stuff is from found objects, which really fits into the touring schedule,” Crank joked. “Sometimes I want to just chill and work with my hands, not have to worry about bus or train schedules. It’s where all those drawings in my sketchbooks can manifest themselves. Doing work in galleries is fun because you don’t have to deal with sound equipment—but then you have to deal with art patrons!”

He’s also got quite the YouTube presence, too. While activity on his channel has dropped off a bit, he still has more than 250 videos, which range from harsh minute-long noise samples with a silent-film background, to stop motion animation, to videos of Crank biking with a bag over his head.

What became abundantly clear talking with Crank was that, while these disparate projects might seem scattered, the live shows are where this creative energy comes together and becomes more than the sum of its parts. Remember: It’s not just a man walking down the street with flooded pants; it’s a man with flooded pants who just performed a noise set. For Crank, it’s the thrill of trying and (sometimes) failing, over and over again, the process, that is the art project itself.

“Someone once said to me, ‘It’s great to see you doing your thing, because it feels like I’m watching something be created,’” Crank said. “And that hit me in the heart—like that’s it! It’s the experimentation. I’m floating around and navigating the waters of an archipelago I’m trying to create.”

So how did Crank come to have one of the most impressive oeuvres of any noise musician, at least in terms of raw artistic output? In his earliest surreal histories, he remarks that his pre-Crank days were filled with a “bunch of art school nude ballets (with chainsaws).” Originally from Maine, Crank actually went to the prestigious Massachusetts College of Arts and Design, where he was a part of their Studio for Interrelated Media. While he was originally a visual artist and didn’t have much of a background in music besides the occasional punk group (he’s still working on his guitar), he knew that he wanted to incorporate audio into his shows.

“I was sick of being in punk bands, and I knew I wanted to do something noisier, but I didn’t want to tell other people what to do” Crank said. “I just didn’t have the vocabulary yet. When I got to MassArt, I was like ‘ah,’ this is Japanese noise, this is John Cage, this is [Kurt] Schwitters. Studio for Interrelated Media was really the goldmine of inspiration, although at the time I was more into running around naked.”

The latter two are just a few of the many more “classically” avant-garde influences he mentioned throughout our talk. Like Merzbow, who takes his name from Dada-reject Schwitters’ art project Merzbau, Crank has drank long and deep from his predecessors in the avant-garde. Visually, his goofy fish mask is a throwback to costumed greats like The Residents, as well as a childhood passion of “just going out into the woods and wishing I was a crocodilian superhero.” Similar to Schwitter’s concept of “Merz”—a fantasia on German “kommerz” (commerce)—Crank has Huso, an “entity that shall not be named” that embodies his aesthetics and artistic animus. True to form, it’s just a pun off of the latin name for the beluga sturgeon, otherwise known as Huso huso.

One of his largest theoretical influences is Allan Kaprow, an American artist whose “Happenings,” or performance art spectacles, redefined the way people thought of art as more than just a finished product, but as an experience itself. More than anything, this is what I felt clarified Crank’s intentions, and is why any profile of him can’t just talk about the music, or art, or videos, or even the array of home-made microphones he sells. Because, for Crank, all these different things are really all part of the same thing, under the same umbrella.

In a show in 2015, one of his audience members asked him “what it all meant,” an obvious joke to which he responded with some ironic pretentiousness about “dialectics.” But talking with Crank, one gets the sense, at least a little, of what it really isall about. He said that, now and as a kid, one of his biggest influences was Wile E. Coyote, and the idea of zany planning, experimentation and setbacks.

“Wile E. Coyote is a being of persistent failure,” Crank said. “Not trying to fail on purpose, but the idea of self-overcoming, self-immolation. Sometimes you can use a banana as a soundboard, and sometimes you get electrocuted. Kaprow said art is child’s play, so I guess you could say I’m playing around. It’s how I let myself be me.”"